After four months of Virtual Design Thinking labs, networking, workshops, and mentorship, 29 participants forming six teams from Kitchener, Waterloo, Cambridge and Guelph were ready to pitch their ideas to a panel of judges.

While the event showcased a variety of creative initiatives, clocKWise came out on top. The program, which promotes cycling through an educational outreach program to post-secondary students, was awarded $5,000 in seed funding.

The winning team — Bailey Gardien, Dami Awoleye, Damaneek Saini, Maegan Segne and Mia Sang — tell Evergreen about their winning idea and their vision for the program. 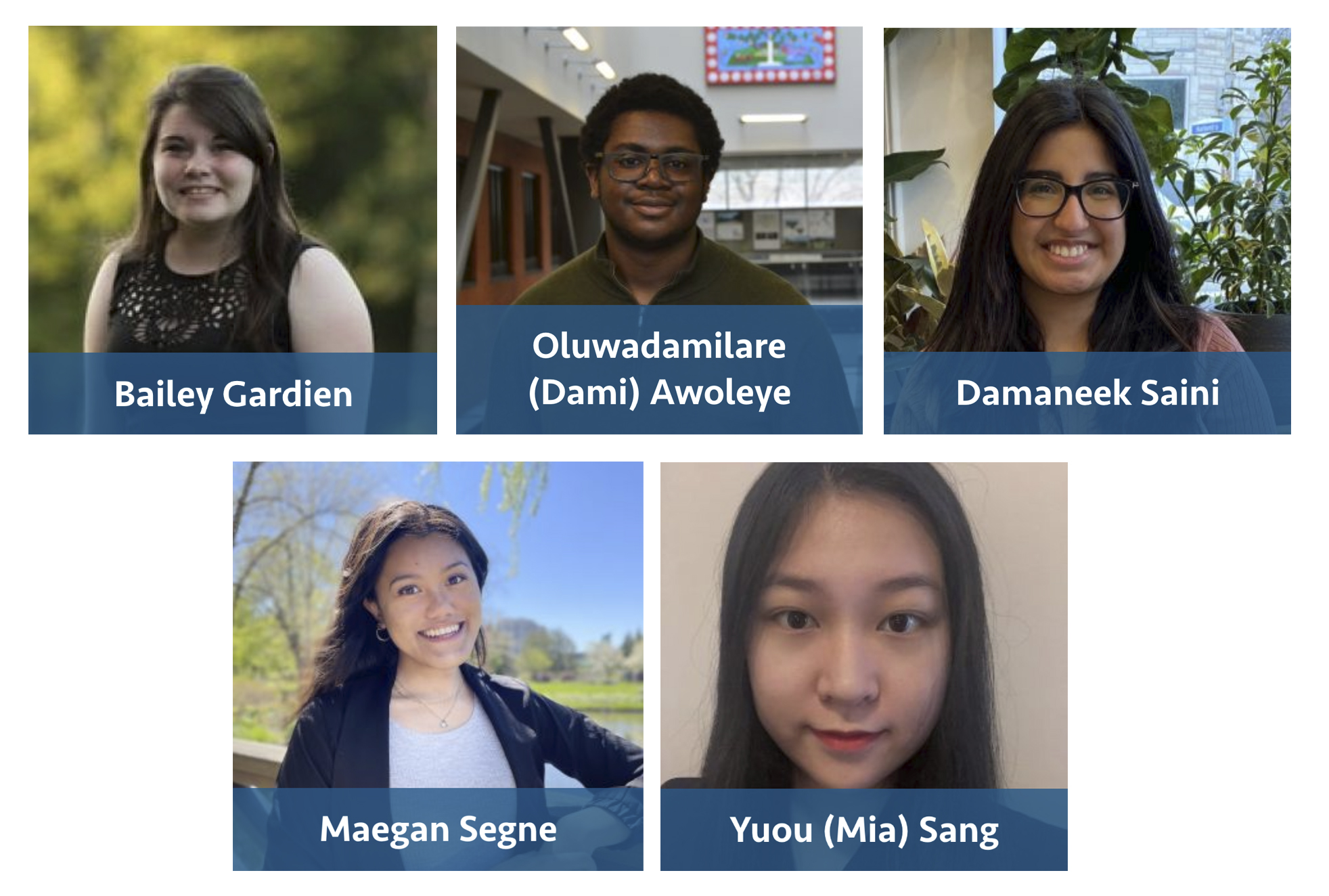 Early in the process the team decided to focus broadly on active transportation, knowing the variety of urban advantages that come from walking, cycling and public transit.

Eventually, they narrowed the scope to cycling. Through extensive community consultation, the team heard from the university community that one of the big barriers to cycling was a fear of riding on the streets.

“I was one of those people,” Gardien adds. “I’m from a small town and I was scared to bike on the road. I just needed someone to show me how to bike in the city and not be scared of biking in a bike lane.”

As they began to develop their pitch, the problem became more and more relatable to the team.

“Through this project, I realized how important this is and how much it affects my life,” Awoleye says. “I feel like my first year (at university) would have been a lot easier if I had a bike to shorten my 40-minute trips to 15-minute trips.”

The team wanted to help students who are financially limited to take up a cost-friendly and healthier alternative to traditional transportation. The program would include workshops and ride-alongs to help students learn to ride a bike, cycling safety tips, how to use the current infrastructure, the best biking routes, basic bicycle repair and more.

The name, clocKWise, is stylized to highlight the Kitchener-Waterloo region. Their slogan, Moving in the Right Direction, relates both to the program’s name (clock movement) and represents the idea that active transportation contributes to living in a healthy city, and the importance of shifting our mindset.

“We chose the demographic of university students because we had the thought that they would be new to the area and not familiar with the infrastructure,” Gardien says. “It could be a great learning opportunity for people that are coming to Waterloo for the first time but are put off because they don’t know how to cycle Waterloo.”

The judges, meanwhile, saw the enormous potential of clocKWise with the right funding.

“I can’t think of a better idea for a healthy city,” says Grant Dyer, one of the judges and VP of People & Culture, Beanfield Metroconnect. “It wraps sustainability together with community, learning and exercise. The team really stepped outside the box and it paid off. I can see this being expanded and even paired with a bike share program

From here, the team wants to continue to develop the program. They already have potential community partners that are interested in the project. Their proposed budget includes bicycle rentals, coordinators, curriculum development and promotion.

“I think if we’re able to get more people into cycling and change that mindset around alternative transportation, we would think it’s a success,” Saini says. “It would be really nice to develop this program into something that can last long after us.”

The Future City Builders program brings together like-minded young people to design a concrete solution to address “healthy city” challenges in their city. Applications are now open for the next cohort, which will be in the Moncton, Sackville, Saint John and Fredericton area.

The Kitchener-Waterloo-Cambridge-Guelph cohort of the Future City Builders program is generously funded by Beanfield Metroconnect, the Government of Canada under the Future Skills program, and RBC Future Launch, as well as other anonymous funders.